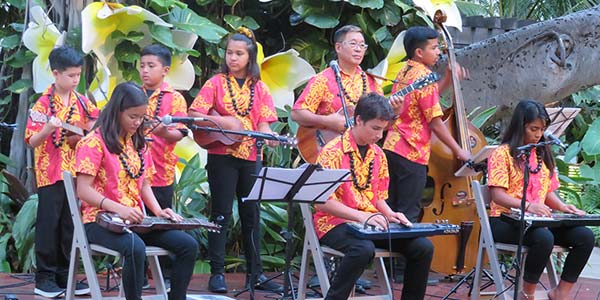 The NextGen were featured in an hourlong presentation on July 2. NextGen steel guitarists Enosa Lyman, Joey Misailidis, Mālie Lyman, and Ethan Goore were backed up by other NextGen musicians and led by Kumu Alan Akaka. A highlight of the presentation was hula performed by Enosa and Iosepa Lyman, who were later joined by sister Mālie Lyman. The Lymans are great-grandchildren of Hawaiian music legend Genoa Keawe.

The NextGen is a group of "Next Generation" Ke Kula Mele keiki students who excel in their craft and are selected to represent the school in various public performance functions. Most are steel guitarists and also sing and play other instruments. The group ranges in age from 10 to 16 years old. The NextGen program and its members are described at Ke Kula Mele's website.

Mele Pakolu is a monthly Hawaiian music event incorporated into the Royal Hawaiian Center's Mele 'Ai Pohaku (songs of the people) initiative. Mele Pakolu features live music and hula and is presented during the first week of each month.

Copyright ©2019 by Hawaii Institute for Music Enrichment and Learning Experiences, Inc., and Cyberventures Unlimited.Terms of Use